You are here: Home › News › Non-Collaboration Policy Between Police and ICE is Approved 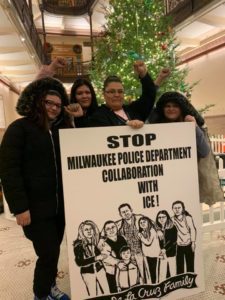 The De la Cruz Family at City Hall after the successful vote.

The new policy requires police to have a judicial warrant signed by a judge in order to notify or collaborate with Immigration & Customs Enforcement (ICE) agents in sharing information or arresting people for possible deportation. Read more about SOP130 here.

According to Christine Neumann-Ortiz, Executive Director of Voces de la Frontera, “The passage of a non-collaboration policy between local law enforcement and ICE is a victory for the broader immigrant rights movement.”

“Local community protections are critical in the face of the Trump administration’s agenda which attacks immigrant communities through racial profiling, family separations, and corroding trust between local law enforcement and the people they are entrusted to serve and protect,” said Neumann-Ortiz. “Under the Trump Administration, we have witnessed the threat of growing white nationalism. In Wisconsin, we have witnessed increased hate crimes.

“Wisconsin is at a historical crossroads ahead of the 2020 election. Milwaukee is ground zero to determine the direction our state and the country goes. As the city that will host the Democratic National Convention in 2020, we’re proud that our city leadership has decided to send a strong message that Milwaukee is a welcoming city for all and our community is standing up for immigrant workers and their families.”

The campaign to push for an updated SOP130 policy began in the Summer of 2019 but drew attention after the arrest and detention of a local Milwaukee resident and small business owner, Jose de la Cruz, on September 23, 2019. De la Cruz was in his vehicle with his family outside of their home, on his way to take his children to school. Neither the police nor ICE had a judicial warrant for his arrest, which was captured on video. See video of arrest here and here.

The De la Cruz family was reunited Wednesday, December 11, after Jose spent 79 days in jail until released on bond. Speaking about his experience, Jose de la Cruz said, “It was a traumatizing experience to see your kids crying as they’re tearing your family apart and there is nothing that you can do. On top of that, you’re surrounded by all these agents, and Milwaukee Police come and harass you, telling you that if you don’t get out of (the car) they’re going to do things to your family and there’s nothing you can do about it. It’s horrible. My youngest daughter now fears police officers when she sees them. We need stronger standards against ICE and police collaboration so more families are not traumatized and torn apart.” Click here to donate to the family.

The push for a non-collaboration SOP130 policy in Milwaukee earned national attention.

The Sanders campaign tweeted, “I stand with @voces_milwaukee today to end the criminalization of immigration. Together, we must and we will reverse Trump’s racist immigration policies and put an end to ICE raids once and for all.”

The Warren Campaign tweeted, “Immigration and law enforcement should be kept separate so that victims and witnesses of crimes feel safe coming forward—combining them only sows distrust and harms public safety. I stand with @voces_milwaukee in their protest today. Immigrants shouldn’t fear their local police.”