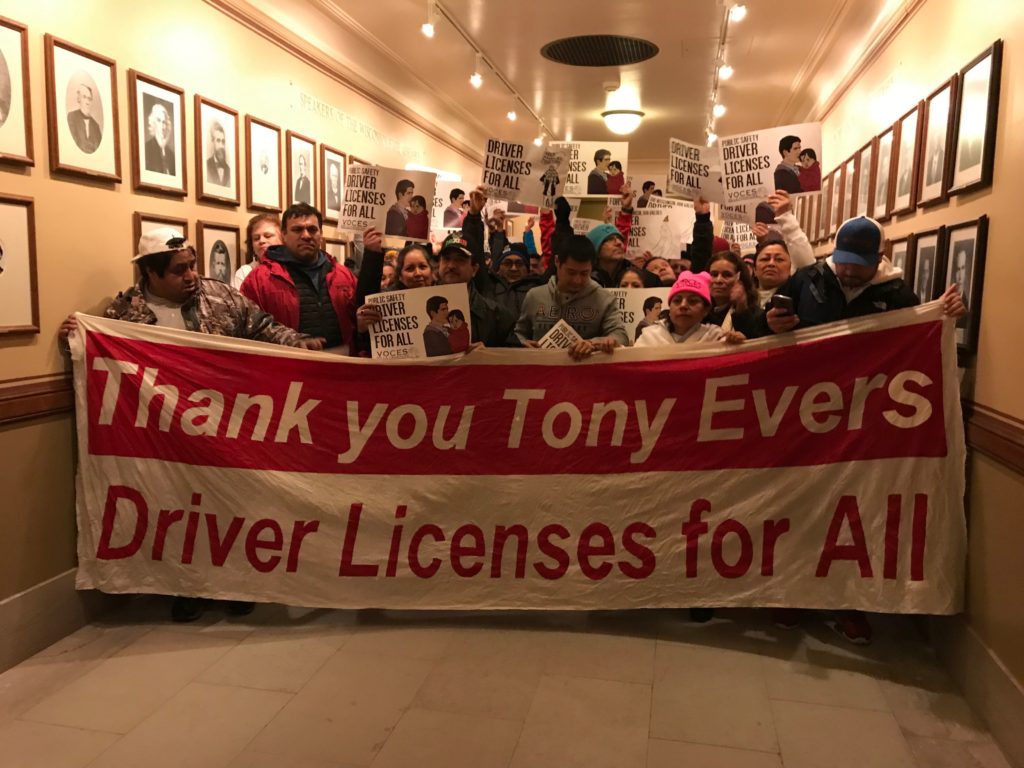 MADISON, WISCONSIN – Over 150 members and supporters of Voces de la Frontera held a press conference and rallied at the Wisconsin Capitol on Monday to celebrate Governor Tony Evers’ inauguration and to show support for Governor Evers’ plan to include the restoration of driver licenses and in-state college tuition for Wisconsin immigrant residents in the 2019 state budget. As officials and the public gathered for the inauguration ceremony for Evers, Lieutenant Governor Mandela Barnes, and other state elected officials, Voces held a press conference outside before entering the Capitol to chant and sing songs prior to the ceremony. Voces members from Milwaukee, Green Bay, Lake Geneva, Racine, Waukesha, and Madison attended.

“The Latino vote was crucial in this election,” said Gabriel Quintero, a father and member of Voces de la Frontera from Waukesha. “I am an immigrant, and unfortunately, I cannot vote, but I helped mobilize my coworkers, friends and family to vote. We all can participate in this great democracy. We are all human beings, we all deserve respect, we all deserve to be treated with dignity. Today is a great victory for our community.”

“We are excited that Governor-elect Evers is including driver licenses and in-state tuition for all in his proposed budget,” said Christine Neumann-Ortiz, Executive Director of Voces de la Frontera. “We are committed to engaging voters from both parties and independents across the state to support these proposals, which will only strengthen Wisconsin. We urge leaders in the legislature from both parties to support these provisions.”

“As advocates our main goal is to save lives and ensure survivors’ safety,” said Veronica Figueroa, Executive Director of Unidos, a Madison-based community organization that works to end domestic violence. “A driver license can save a survivor’s life. A driver license is a door to independence, empowerment, and building a new life. Passing a driver license bill is a tremendous opportunity to support and empower survivors and aid them in the process of escaping abuse.”

“The Wisconsin Farmers Union recognizes the important role that immigrants play in our society and on our farms, and has for years supported the issuance of driver cards to allow immigrant workers, their families, and their farm employers to come out of the shadows,” said W. Michael Slattery, a farmer, economist, and member of the Wisconsin Farmers Union. “This approach is the way that we can be responsible citizens with our neighbors and employees, particularly in light of the inability of the US Congress to formulate a just and comprehensive immigration policy.”