MILWAUKEE – In response to Milwaukee County Sheriff Earnell Lucas’ announcement on Wednesday that his agency will no longer share information with or hand people over to Immigration and Customs Enforcement (ICE) in absence of a judge’s warrant, ICE declared that they would “continue to conduct at-large arrests in local neighborhoods and at work sites, which will inevitably result in additional collateral arrests.”

ICE has utilized similar intimidation tactics across the country to try to intimidate local governments into collaborating with ICE’s campaign of terror against immigrant families. In early February, ICE carried out enormous raids in North Carolina separating over 200 families. ICE specifically said that the arrests were in retaliation for county sheriffs there ending compliance with warrantless ICE detainer requests and involvement in the federal 287(g) program.

Voters in North Carolina and in Wisconsin have made it clear that they want sheriffs who will uphold immigrant rights and prioritize public safety over discriminatory, cruel anti-immigrant politics. Retaliation by ICE undermines democracy and threatens the safety of our communities.

“The statement put out by ICE is rash, ill-advised, and unworthy of any institution of the United States government,” said Milwaukee County Supervisor Steven Shea. “It is written in the fear mongering tone of an authoritarian regime.”

“Our community will not be blackmailed,” said Mario Ramirez, Lead Organizer of Voces de la Frontera. “Ending ICE collaboration is keeping families together, protecting Constitutional rights, and improving public safety by allowing all people to be safe in contacting law enforcement to report crime. ICE’s threats just show that ICE is not a law enforcement agency, but a family separation agency. We will continue to support people targeted by ICE and work in Congress to cut ICE’s funding and hold them accountable for their abuses. In Milwaukee, tens of thousands of workers participated in Day without Latinx & Immigrants general strikes to stop Sheriff Clarke’s collaboration with ICE. Last November, the voters overwhelmingly supported Sheriff Lucas after he said he would not help ICE separate immigrant families. Our community is strong, we are organized, and we will not be intimidated.”

“ICE’s retaliatory threat against Milwaukee families is horrific and absolutely chilling,” said Rebecca Lynch, Deputy State Director, Wisconsin Working Families Party. “In a democracy, elections matter. Our democratically elected Sheriff ran on a platform of advancing true public safety, building trust with communities, and not honoring unconstitutional ICE detainers. In November, Earnell Lucas was elected on that platform, and yesterday he held a press conference to re-affirm that stance. We applaud Sheriff Lucas’ statement, and have this message for President Donald Trump and his enablers: the people of this country and of Milwaukee county will not allow a rogue deportation force to terrorize our communities and usurp our democracy. We are winning in the courts, we are winning at the ballot box, and we will organize and mobilize until ICE is abolished, communities can thrive and all people can be free.” 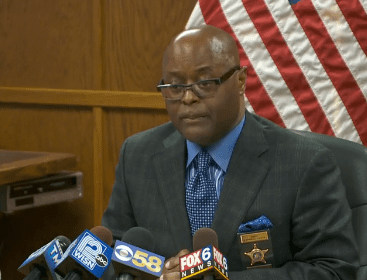 Save the date for May 1st, 2019
Join us on March 14 in Madison! Reserve your seats on our bus today!