You are here: Home › News › Immigrant Families & Broad Coalition Fill the Capitol to Restore Driver Licenses for All

MADISON, WISCONSIN – On Thursday, hundreds of immigrant families and supporters from throughout Wisconsin visited legislators to urge support for restoring driver licenses for immigrants and low-income people in Wisconsin. Participants came from over 11 cities, including Madison, Waukesha, Racine, Kenosha, Wautoma, Wisconsin Dells, Green Bay, Appleton, Lake Geneva, Arcadia, and Milwaukee. Participants visited the office of every legislator before holding a Driver Licenses for All coalition press conference in the Capitol. 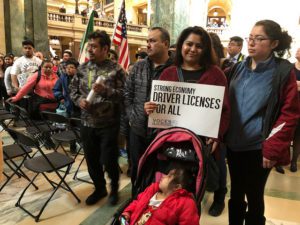 “Wisconsin is ‘America’s Dairyland,’ and that is only possible because of immigrant dairy workers,” said Germán Sanchez, a dairy worker from Omro, Wisconsin. “Dairy is the backbone of our state’s economy. Restoring driver licenses would strengthen Wisconsin’s economy for years to come.”

economist, and member of the Wisconsin Farmers Union. “Wisconsin dairy farmers generated more than $43 billion dollars in milk production in 2018. Of that, it is estimated that roughly $34 billion is produced on less than 900 farms employing about 6,500 farm workers, the vast majority of whom are undocumented. Dairy workers produce more than 10% of our state’s GDP. They are family-oriented people who are providing for their children, are upright and law-abiding and conscientious persons, and are willing to work difficult jobs. We need laws that facilitate our business. Other states have issued similar laws and the results have been redeeming. Let us have the same in Wisconsin.”

“I support the provisional driver car/license because I believe it will help keep the community of Green Bay and all of Wisconsin safer,” said Green Bay Chief of Police Andrew J. Smith in a letter to legislators. “People will be tested and know the rules of the road. It will allow us to identify the people currently living in the shadows. I know there are a dozen states issuing licenses like these and by the accounts I have heard the program is working in those states. I sincerely hope we can do it here in Wisconsin.”

“For numerous survivors of domestic violence across Wisconsin, having access to a driver’s license could be the difference between safety and independence or remaining with a violent abuser,” said Patti Seger, Executive Director of End Domestic Abuse Wisconsin. “Particularly for low-income and undocumented or immigrant survivors, a valid driver’s license is a critical tool that allows them to more safely interact with law enforcement and leave abusive situations on their own terms. We hope the legislature will stand with all survivors of domestic violence and include this important proposal in the final version of the state budget.”

“Today, we call on lawmakers to abandon harsh anti-immigrant rhetoric and harmful policies that make it harder for Wisconsin families to get ahead,” said Ken Taylor, Executive Director of Kids Forward. “Instead, lawmakers should roll up their sleeves and join us in building safe and just communities for families.”

“The Bible teaches us, in Leviticus, ‘The stranger who resides with you shall be to you as one of your citizens; you shall love them as yourself…You shall have one standard for stranger and citizen alike: for I the LORD am your God’ (Leviticus 19:33-34; 24:22),” said Rabbi Bonnie Margulis of Wisconsin Faith Voices for Justice. “Wisconsin needs to have one such standard for the ability to drive for all our residents, regardless of immigration status.”

“The #CLOSEmsdf campaign is in solidarity with immigrants in Wisconsin and in support of the driver license for all legislation,” said Sharyl McFarland, #CLOSEmsdf Campaign Coordinator. “Black and Brown immigrants are members of our community and must not be unnecessarily profiled, criminalized and detained simply for not having access to a proper license. The CLOSEmsdf campaign fights to close the Milwaukee Secure Detention Facility and for an end to excessive supervision, warrantless technical rule violations, and the crimeless revocations of predominantly Black, Brown, and Indigenous people that result in reincarceration. Incarceration of people of various statuses from citizens to non-citizens results in trauma, poverty, family separation and many other hardships. Legislators must pass this proposal to grant licenses for all and stop the targeting of Wisconsin’s immigrant communities.”