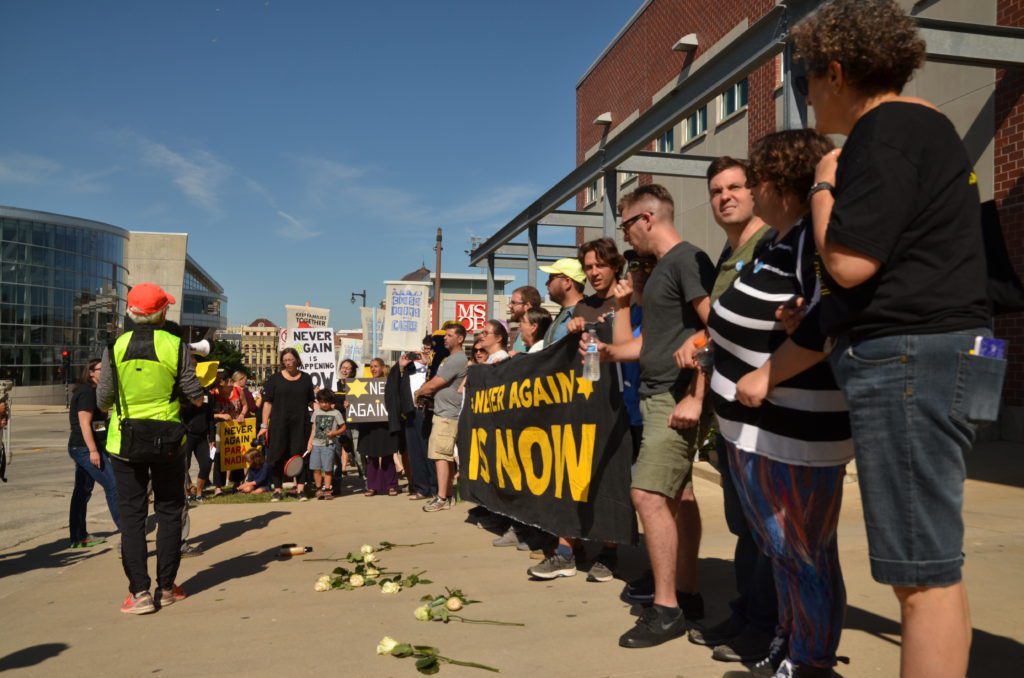 Solidarity actions shut down the Milwaukee ICE Office on August 1, 2019.

Milwaukee action is part of a national wave of Jewish-led “Never Again” actions to resist the Trump Administration’s campaign of terror against immigrants and refugees.
Video here
Photos here
MILWAUKEE, WISCONSIN — On Thursday, August 1st, 22 Wisconsin Jewish leaders blockaded the garage doors of the Milwaukee Immigration and Customs Enforcement (ICE) building beginning shortly after 9 AM in an act of civil disobedience to stop ICE agents from leaving to carry out raids and detentions. At the same time, hundreds of community members rallied outside the building.  This was the latest in a wave of Jewish-led Never Again actions calling for the closure of the Trump Administration’s concentration camps at the border and permanent protection for undocumented immigrants and people seeking asylum. Shortly after the Milwaukee blockade began, ICE agents posted a sign on the building’s door saying the building would be closed “until further notice.” The group blocked the garage doors until after 4 PM, which is usually the time that the ICE building closes. There were no arrests.

“So many people from the Jewish community came out to protest ICE and the inhumane treatment of migrants at the border,” said Rabbi Laurie Zimmerman of Congregation Shaarei Shamayim in Madison, one of the organizers of Thursday’s action. “I have never seen such a unique and passionate Jewish protest in the 16 years I have lived in Wisconsin. All our lives we had been taught, ‘You shall not stand idly by.’ Today we demanded an end to the injustices occurring in our country and stood in solidarity with immigrant communities everywhere.”
“I’ve had the sobering experience of going to McAllen, Texas, on a couple of occasions,” said Congresswoman Gwen Moore (D-Milwaukee), who addressed protesters. “I’ve seen first-hand the egregious situations that human beings are placed in. I just don’t have the luxury of saying nothing or doing nothing. We have got to rise up, because evil can only continue if good people do nothing. So, when I learned this march was going to occur at 8 a.m., there was no other place that I was going to be.”
The Milwaukee action follows a month of Jewish-led Never Again actions across the country at detention centers and ICE buildings across the country, including in New Jersey, Boston, Los Angeles, Philadelphia, Chicago, San Francisco, and Washington, D.C. On Tuesday, Jewish community members in Minneapolis blocked entrances to a federal building. The Milwaukee action is the first time that a group has shut down an ICE building for an entire day.
“It is historic to shut down an ICE facility for an entire today,” said Christine Neumann-Ortiz, Executive Director of Voces de la Frontera. “The Never Again actions are a source of inspiration and strength for the Latinx community.  There is a broad and diverse movement inspired by many different communities’ experience of persecution and struggle. The Never Again actions are a warning from the Jewish perspective of what could happen if we don’t escalate our resistance to the growth of modern-day fascism. Civil disobedience is a necessary tactic to block efforts to persecute and separate families. We must also put pressure on our elected officials like U.S. Senator Baldwin and Representative Kind, who should not be voting with Republicans to increase funding to ICE and Customs and Border Protection.”
The Never Again Is Now Wisconsin group further explained Thursday’s action with the following statement:
“Central to Jewish life is the concept of Tikkun olam, the responsibility to heal the world and pursue social justice. Jews are taught from an early age that to remain silent in the face of injustice is morally unacceptable. We know from bitter experience where the separation of families, the rounding up of people, and the creation of detention/concentration camps leads. We refuse to wait and see what happens next. We are putting our bodies on the line and risking arrest in memory of our loved ones whose families were broken up, whose lives were stolen, and because when we say never again, we mean never again for anyone. We take action now to stop the breaking up of families and the deportation of immigrants, refugees, and asylum seekers and to demand that ICE be shut down.”
Contact: Sam Singleton-Freeman, (414) 469-9206, sfreeman@vdlf.org
Michael Rosen, (414) 467-8908, rosenmatc@gmail.com
Follow Voces de la Frontera on Twitter at @voces_milwaukee and on Facebook.
###