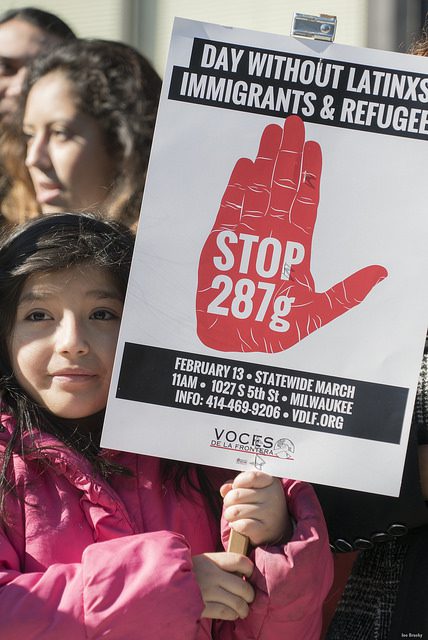 WAUKESHA, WISCONSIN – Today it was revealed that Waukesha County Sheriff Eric Severson formally requested 287g authorization for his deputies in a secret May 15th letter. Under the 287g program, Waukesha sheriffs would be authorized to racially profile, interrogate, and detain community members for deportation. This year in Milwaukee, Voces de la Frontera organized two general strikes of over 80,000 people combined to oppose 287g and to call for former Milwaukee County Sheriff Clarke’s resignation after he applied for the program. During the strikes over 300 businesses closed to highlight the importance of immigrants to the economy.

“We have a broken immigration system that needs to be fixed,” said Anselmo Villarreal, President and CEO of La Casa de Esperanza in Waukesha. “It needs to be fixed through comprehensive immigration reform. Initiatives like 287g not only distract us from achieving our goal, but also hurt and confuse our communities. I truly believe that the authorization of 287g legislation should be stopped and I encourage Sheriff Severson to do the right thing by rescinding the 287g application.”

“Today we learned that Sheriff Severson secretly — and disgracefully — asked Trump to authorize Waukesha Sheriff’s deputies to racially profile and separate Wisconsin immigrant families,” said Christine Neumann-Ortiz, Executive Director of Voces de la Frontera. “This contradicts Sheriff Severson’s own statements to his constituents and before the US Senate. There is massive opposition to this program in Waukesha, Milwaukee, and in Wisconsin. Sheriff Severson himself has acknowledged that 287g does nothing to make the community safer. By making people afraid to report crimes, Sheriff Severson will make Waukesha County less safe. 287g will make workers, shoppers, and employers avoid Waukesha County, causing serious economic harm. 287g creates fear and promotes discrimination, plain and simple. We call on Sheriff Severson and Milwaukee County Sheriff Richard Schmidt to rescind their applications for 287g and do what’s right for Wisconsin.”