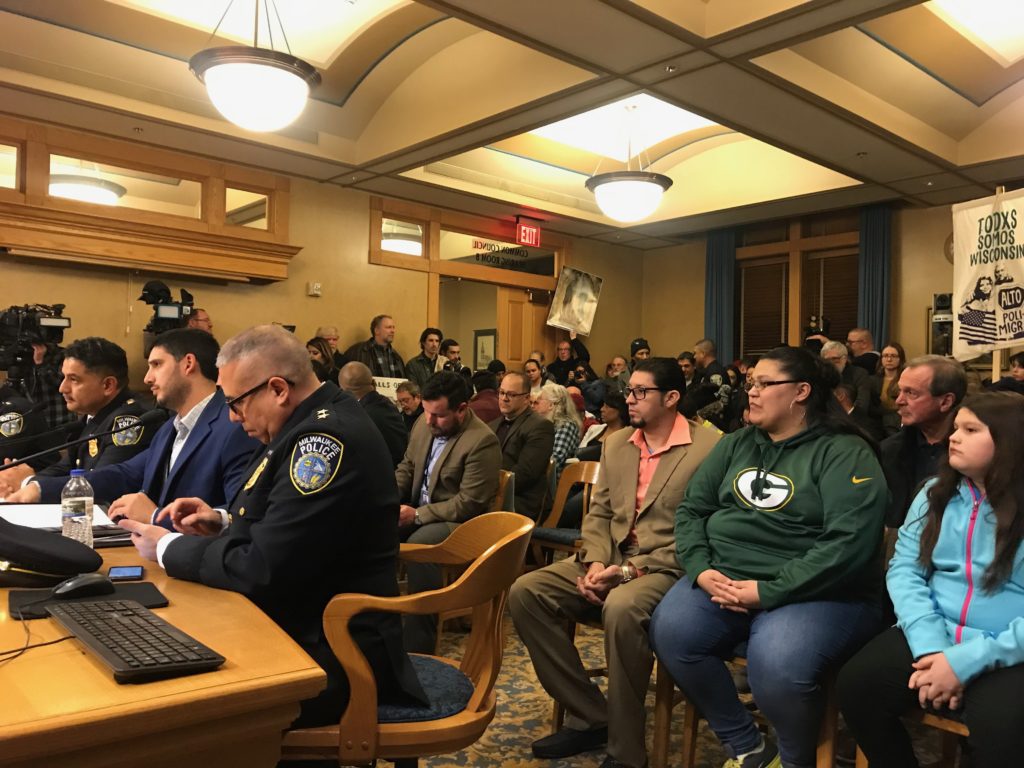 If approved by the full FPC next Wednesday, the new policy would require police to have a judicial warrant signed by a judge in order to help Immigration & Customs Enforcement (ICE) agents arrest people for possible deportation.
Click here to watch video from Thursday’s meeting.
According to Christine Neumann-Ortiz, Executive Director of Voces de la Frontera, “Voces de la Frontera put out a clear policy requiring a judicial warrant in order for the Milwaukee Police Department (MPD) to cooperate with Immigration and Customs Enforcement (ICE). This position is legal. It’s not going to threaten funding. It’s been passed by many other cities and has been upheld by the courts.
“We’re glad the FPC Committee rejected a proposal from the Police Chief that would have included six loopholes allowing working with ICE agents even without a judicial warrant,” she continued. “These overbroad exceptions would have opened the door to racial profiling and unconstitutional detentions and lead to unjust ICE detentions and deportations.”
“We hope that Mayor Tom Barrett will speak out to support the changes made by the FPC committee and urge the full Commission to approve them next week,” Neumann-Ortiz said.
Attending the FPC committee hearing was Jose de la Cruz and his family. They were reunited Wednesday, December 11, after Jose spent 79 days in jail. He had been arrested on September 23 while with his family in their car. Neither the police nor ICE had a judicial warrant for his arrest, which was a traumatic event for his wife and especially the three daughters with him at the time. The arrest was captured on video.
Link to Voces video of MPD collaboration with ICE in the detention of Jose De la Cruz

Link to recorded footage from inside the vehicle during arrest

As the family walked down the hallway to the City Hall hearing room, they were surrounded by about one hundred supporters who chanted “Justice for Jose”.
Jose de la Cruz said, “It was a traumatizing experience to see your kids crying and they’re tearing your family apart and there is nothing that you can do. On top of that, you’re surrounded by all these agents, and Milwaukee Police come and harass you telling you that if you don’t get out of (the car) they’re going to do things to your family and there’s nothing you can do about it. It’s horrible. My youngest daughter now fears police officers when she sees them. We need stronger standards against ICE and police collaboration so more families are not traumatized and torn apart.”
“As the city that will host the Democratic National Convention in 2020, we should be sending a strong message that Milwaukee is a welcoming city for all and our community is standing up for immigrant workers and their families,  “ said Christine Neumann-Ortiz.
Both presidential candidates Bernie Sanders and Elizabeth Warren came out publicly in their support for Voces de la Frontera’s recommended changes.
The Sanders campaign tweeted, “I stand with @voces_milwaukee today to end the criminalization of immigration. Together, we must and we will reverse Trump’s racist immigration policies and put an end to ICE raids once and for all.”
The Warren Campaign tweeted, “Immigration and law enforcement should be kept separate so that victims and witnesses of crimes feel safe coming forward—combining them only sows distrust and harms public safety. I stand with @voces_milwaukee in their protest today. Immigrants shouldn’t fear their local police.”
Voces de la Frontera calls on community members to attend the public hearing and final FPC vote at Milwaukee City Hall Wednesday, Dec. 18, 2019, at 6:00 pm to urge the Fire and Police Commission to prohibit unnecessary and unjust entanglement between police and ICE.

The De la Cruz family after Jose’s release on Wednesday, December 11, 2019, outside of the UICIS Milwaukee Field Office.

Non-Collaboration Policy Between Police and ICE is Approved
Voces’ big push: Early voting helps our cause