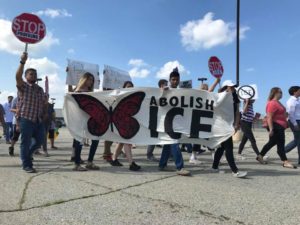 Voces de la Frontera strongly condemns the efforts of the Trump Administration to use the threat of a government shutdown to secure over $5 billion for a border wall as part of a short-term national budget bill.

“Trump’s wall is nothing more than a monument to ignorance, hate and waste,” said Christine Neumann-Ortiz, Executive Director of Voces de la Frontera. “Immigration and Customs Enforcement (ICE) and Customs and Border Protection (CBP) are rogue agencies that already have bloated budgets and have been conducting escalated attacks on the immigrant community by separating families and disregarding the safety and wellbeing of those seeking refuge at our nation’s borders.”

As this bill moves to the Senate floor, we urge Wisconsin Senators Tammy Baldwin and Ron Johnson to vote against additional funding for Trump’s wall and the inhumane, racist immigration policies that have torn families apart.