MILWAUKEE – Thursday morning, the Milwaukee County Board of Supervisors overwhelmingly passed a resolution declaring support for restoring access to driver licenses at the state level for all Wisconsin residents regardless of immigration status. The Racine Common Council passed a similar resolution in January. The Milwaukee County resolution was introduced by County Supervisor Sylvia Ortiz-Velez, and it passed by a 14-2 margin. Click here for video of the vote. 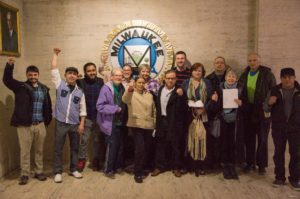 Voces members and supporters celebrate after the Milwaukee County Board of Supervisors voted to endorse the restoration of driver licenses.

“I came to this country hungry, as a single parent to six children, the youngest of whom was just three years old when we arrived,” said Guadalupe Romero, a member of Voces de la Frontera, while testifying during a County Board Judiciary Committee hearing on the resolution on March 7th. “That’s why we’re seeking support for our efforts to regain driver licenses. I want to contribute to this country. I want to continue being a hard-working person.”

“I’m very pleased that this item has passed and want to thank all the people who came to testify in support of this measure,” said County Supervisor Sylvia Ortiz-Velez, author of the resolution. “The County of Milwaukee stands firm in its support of our vibrant immigrant community.”