31 ministers, rabbis, and other religious leaders blocked the garage doors of the ICE building in Milwaukee to stop agents from leaving to detain and deport community members

Hundreds of people rallied at the same time 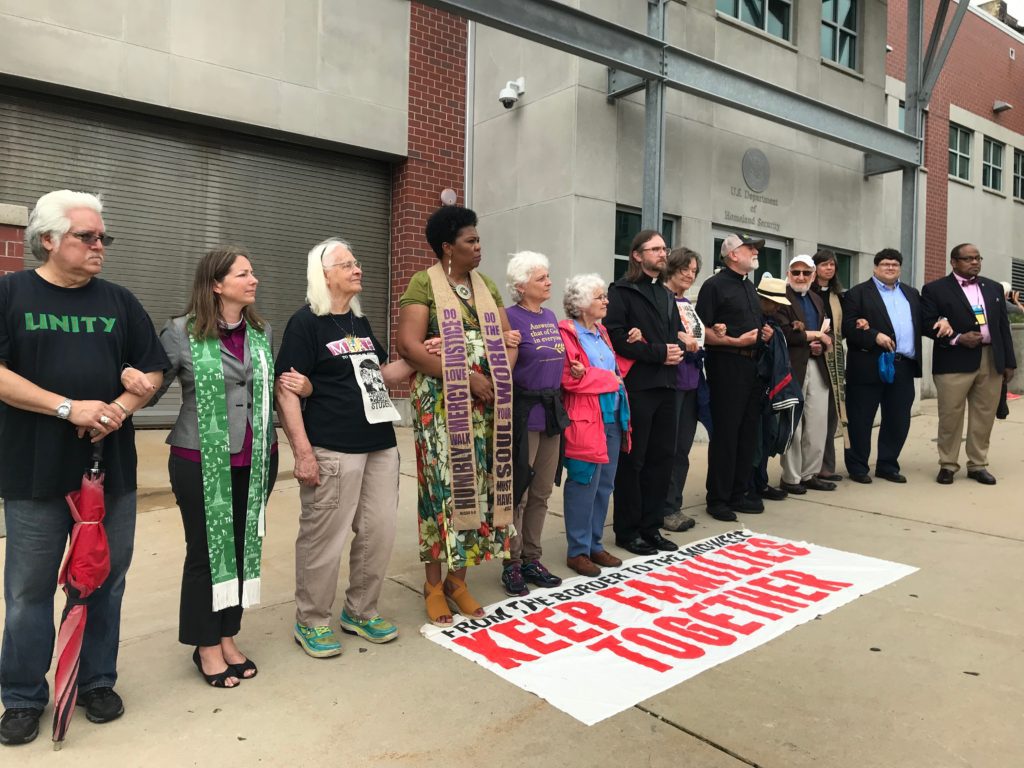 MILWAUKEE, WISCONSIN — On Monday, a group of 31 ministers, rabbis, and religious leaders blocked the garage doors of the ICE building in Milwaukee to resist President Trump’s threatened immigration raids targeting refugee families and the Administration’s continued policies of separating families at the border and imprisoning people seeking asylum in brutal, inhumane conditions, including children and families. At the same time, over 500 people rallied in the streets surrounding the ICE building, at times blocking traffic. Prior to the rally, hundreds of delegates from the United Church of Christ from throughout the United States visiting Milwaukee for their general synod marched from the Wisconsin Center to the ICE building. The protest was organized by Voces de la Frontera, the United Church of Christ Justice and Witness Ministries, Racine Interfaith Coalition, WISDOM, and MICAH. Civil disobedience participants included rabbis, Evangelical Lutheran Church in America ministers, United Church of Christ ministers, Presbyterian ministers, and members of the Milwaukee Friends Meeting (Quakers).

Monday’s protest follows a week of threats, reversals, and more threats from the President. On Friday, the Washington Post reported that on Trump’s prompting, Immigration and Customs Enforcement (ICE) was planning a “family operation” set to start Sunday to target families that have sought asylum living throughout the US. Then on Saturday, Trump tweeted that he had temporarily halted the family raids in response to outcry from the public and elected officials. However, Trump said that the family raids would begin in two weeks if Congress doesn’t pass new, unspecified legislation to stop families fleeing violence from receiving safety and asylum in the US.

“I want my parents back,” said Paula Hincapie, who spoke to the gathered crowd during the civil disobedience. Paula’s mother, student pastor Betty Rendón of Emaus Lutheran Church in Racine, was deported by ICE with her husband Carlos Hincapie last month. The family sought asylum in the US from the Civil War in Colombia. “I want to support other families who are being separated. I want to fight to stop the deportations. My mom was a pastor in this community and everybody knew her. My dad helped the community by working in construction. He built houses. He is a very hardworking man. My family is heartbroken because we are not together.”

“As a Jew and a rabbi, I know what it is to be persecuted,” said Rabbi Bonnie Margulis of Wisconsin Faith Voices for Justice, who was one of the religious leaders sitting in to block ICE’s garage doors. “We have to stand together as people of faith and as immigrants and as children of immigrants in solidarity for justice.​​​​​​”

“As Christians, we follow the teachings of an Afro-Semitic Palestinian Rabbi whose parents were once forced to seek refuge, with him, in a foreign land,” said Rev. Traci Blackmon, Associate General Minister of the United Church of Christ, who also was one of hte 31 ministers blocking the ICE doors. “As a profession of our faith, the United Church of Christ is compelled to speak out and stand up against inhumane deportation policies that refuse to welcome the stranger, whether refugee or immigrant, ignore the inherent worth of all human beings and violate the moral laws of every faith in this land.”

“Today we shut down ICE to send a message,” said Christine Neumann-Ortiz, Executive Director of Voces de la Frontera. “As Trump escalates, so will our resistance. We are going to stand together to demand that ICE leave our communities. We are going to put our bodies on the line to stop the further separation of families. We will fight to have these families reunited in the future. We will also fight to win protections at the local and state level. This includes revising Milwaukee Police Department policies to ensure non-collaboration with ICE in the absence of a judicial warrant, and at the sate level restoring driver licenses for immigrants. Finally, we are organizing to build our voting power to bring about real immigration reform that treats immigrants with the humanity that they deserve.