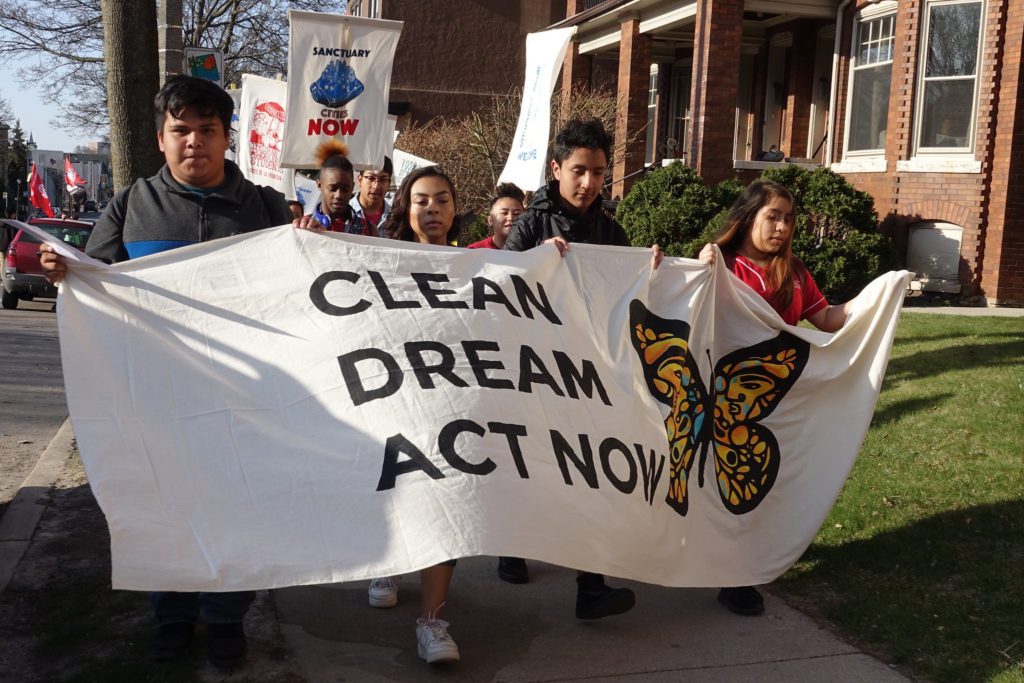 Youth Empowered in the Struggle members marching on May 1st, 2018. Photo: Sue Ruggles.

MILWAUKEE — On Tuesday, the House of Representatives passed the Dream and Promise Act, which provides a path to citizenship to some 2.5 million immigrant young people and refugees currently threatened with deportation because of President Trump’s decision to end the Deferred Action for Childhood Arrivals (DACA) program and Temporary Protected Status (TPS) and Deferred Enforced Departure (DED) protections. The Dream and Promise Act is the first modern immigration reform legislation to provide a broad path to citizenship for immigrants without including any measures to further militarize the border or provide funds to increase the detention of immigrants and the separation of families.

The Dream and Promise Act would provide a path to citizenship to current DACA recipients and to undocumented young people who came to the US before the age of 18 prior to 2015. According to a recent poll, 77% of the public support a path to citizenship for undocumented young people, known as Dreamers. The bill would also provide a path to citizenship for refugees who qualified for DED or TPS protections as of September 2016. All applicants would have to pass a background check. TPS and DED protect refugees who have left specific countries following natural disasters or violent conflict. Since taking office, Trump has revoked TPS and DED protections from refugees from El Salvador, Haiti, Nicaragua, Sudan, Honduras, Nepal, and Liberia. Most people protected by TPS and DED have lived in the US for decades.

“If the Dream and Promise Act is passed, it will protect millions of people like me who were left behind after Trump ended DACA,” said Yareli Saurez, 18, a soon-to-be freshman at Cardinal Stritch University in Milwaukee and member of Voces’ student arm Youth Empowered in the Struggle. Yareli would have qualified for DACA if Trump hadn’t ended the program. “We should never have to go back to hiding in the shadows. In Wisconsin, we protested at Paul Ryan’s home and church, we held school walkouts, and we engaged in peaceful civil disobedience urging Congress to pass the clean the Dream Act. We pushed Paul Ryan out, and now we have won passage of this bill. We will continue to fight to pressure US Senator Ron Johnson and the Senate Republicans to pass this legislation.”

The bill’s passage in the House comes one week after Immigration and Customs Enforcement (ICE) deported Racine student pastor Betty Rendón and her husband Carlos Hincapie, who had sought asylum as refugees from Colombia’s civil war. ICE also detained the couple’s daughter Paula Hincapie even though she has DACA. After public pressure, ICE released Paula and did not seek to revoke her DACA.

“The Dream and Promise Act protects millions of young people and refugee families from Trump’s escalating campaign of terror against immigrant communities,” said Christine Neumann-Ortiz, Executive Director of Voces de la Frontera. “The Dream and Promise Act represents a significant step forward for the immigrant rights movement because it provides a broad and inclusive path to citizenship for immigrant youth and refugees without including any measures to further militarize border communities, criminalize immigrants, or increase deportations and the separation of families. It also shows our growing strength because it was supported by all Congressional Democrats and a section of Republicans.

“These protections are necessary because ICE is escalating their attacks, breaking up families like the Rendón-Hincapie family and targeting Dreamers like their daughter,” continued Neumann-Ortiz. “If not for community initiative and public light, ICE would have deported Paula Hincapie, even though she has DACA. The expedited deportation of Carlos and Pastor Betty, a Lutheran religious leader, makes clear that ICE under the Trump Administration has no limits on their abuse. Up to now, Wisconsin Republicans under Trump have completely failed to provide leadership on national immigration reform, and we have no illusions that Senator Ron Johnson will find the courage to do so now. But this bill is about defining what real reform will look like if we elect pro-immigrant candidates for the House, Senate, and Presidency in 2020, and that fight has already started.”