Given a Chance to Pass the Dream Act, Paul Ryan Again Sides with White Supremacists

Both of the bills Ryan has said he will allow votes on would lead to the separation of millions of immigrant families, and must be defeated

Racine, Wisconsin – On Tuesday, US Speaker of the House Paul Ryan announced that he will schedule votes in the near future on two cruel anti-immigrant bills that provide no guaranteed protections for DACA recipients but reduce family reunification visas and provide funding to expand walls along the US-Mexico border. Ryan refused to allow a vote on the Dream Act, which would 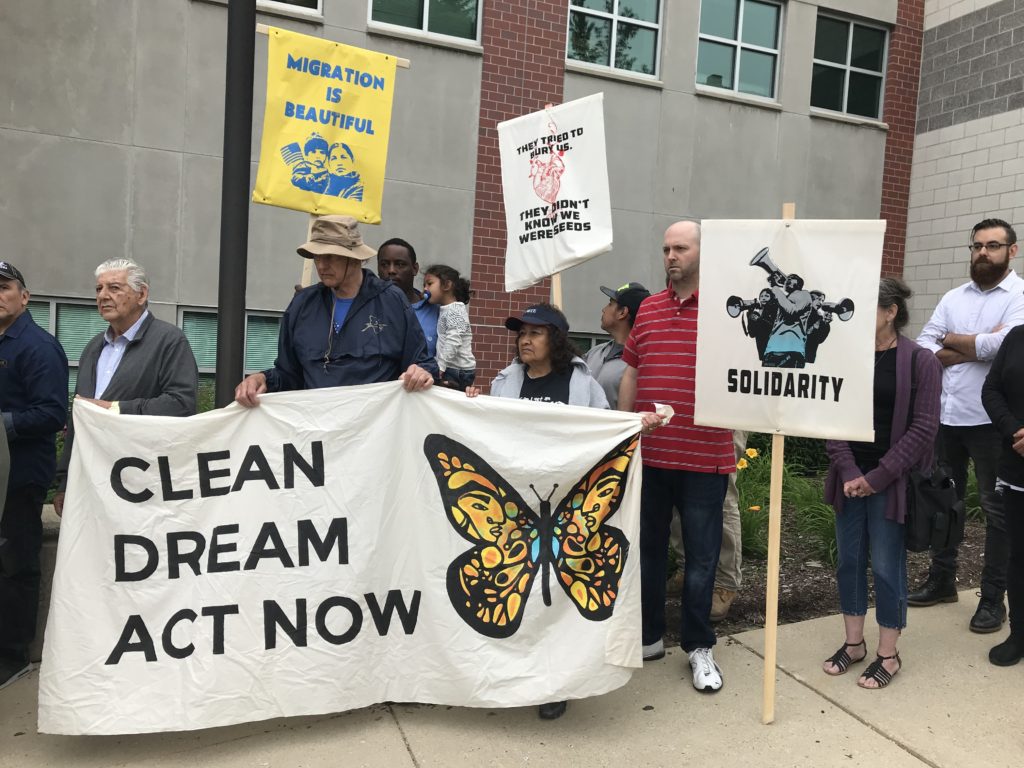 Family and supporters of Franco Ferreyra rally for his freedom at the Milwaukee ICE office on Tuesday. 6/13/18.

provide a path to citizenship for immigrant youth now in danger of deportation because of the President’s decision to eliminate DACA.

In recent days, so-called moderate Republicans and Congressional Democrats had garnered 216 of the 218 signatures needed to force a vote on the Dream Act over Speaker Ryan’s objections through a legislative maneuver known as a discharge petition. Last week, Ryan held meetings with the Republicans spearheading the discharge petition and the most anti-immigrant Republican members of Congress to pressure the “moderates” to drop their push. As a key deadline passed today without the “moderates” getting the two more signatures they needed, it appears that Ryan has succeeded.

Speaker Ryan’s refusal to protect immigrant youth and families comes as Immigration and Customs Enforcement (ICE) agents have arrested immigrant young people who live and work in Speaker Ryan’s district who would be protected by the Dream Act, most recently Waukesha Dreamer Franco Ferreyra. In 2016, Speaker Ryan memorably told a mother and DACA recipient named Angela Villalobos that she had no reason to fear being separated from her children despite Trump’s election. Even as people who qualify for DACA like Franco are detained, Speaker Ryan is refusing to keep his promise to Angela and pass legislation to protect them.

“Speaker Ryan’s decision is another disgraceful sign that the Republican Party is the party of anti-immigrant hate, waging a war on families,” said Christine Neumann-Ortiz, Executive Director of Voces de la Frontera. “Speaker Ryan cannot call himself a family man when he is willing to destroy other families in service to white nationalists. If Speaker Ryan would keep his word and allow a vote on the Dream Act, young people like Franco would be able to stay with their families and communities. Instead, Ryan is allowing votes on two family-separation, mass deportation bills opposed by the vast majority of voters but supported by the hard core white nationalist element in the Republican Party. Our movement will defeat these hate bills, and we will mobilize the vote to beat back politicians trying to build a career on cruelty to others.”