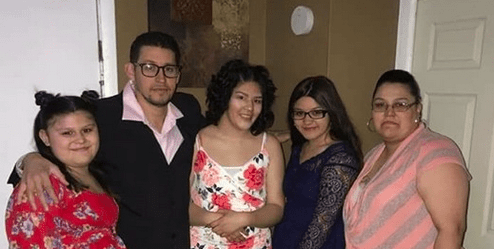 Click here to support this Milwaukee family separated by ICE

MILWAUKEE, WISCONSIN –On Monday,  September 23, 2019, around 9:30 am, Jose De la Cruz-Espinosa was arrested by the Milwaukee Police Department (MPD) in collaboration with Immigration and Customs Enforcement (ICE). Jose was with his wife and their three daughters 14, 13, and 11 years of age. The family was in their car in front of their home getting ready to go to school when ICE agents blocked and approached their vehicle. The family refused to open the doors demanding ICE present a judicial warrant.  ICE flagged MPD for assistance. An MPD officer assisted ICE by forcefully reaching into vehicle unlocking and opening the doors. While Jose’s wife and children cried out, MPD officers arrested and handcuffed him while he was still inside the vehicle. Jose was handed over to ICE agents who took him into custody.

“It is undeniable from video recordings, both inside and outside of the vehicle, that Milwaukee Police Department (MPD) collaborates with ICE to break up families,” said Christine Neumann-Ortiz, Executive Director of Voces de la Frontera. “It is exactly why we have been calling on Mayor Barrett, Police Chief Morales and members of the Fire & Police Commission to support revising existing MPD language to ensure incidents like these do not happen. It is an immoral and gross misuse of scarce public dollars. The use of MPD officers, canines, and resources, to carry out these operations undermines MPD’s mission to build community trust and safety when they serve as a tool by ICE to break up working-class families.”

According to Neumann-Ortiz, “what should have been a start to a normal school day, ended up being a living nightmare as a father was forcefully taken from his family. Incidents like this do not just terrorize a family, they terrorize and outrage a community. As ICE escalates their campaign to break up more families under the Trump Administration, we call on the public to attend the next public hearing of the full members of the Fire & Police Commission on October 3rd to demand that this measure be passed immediately.”

According to Jose’s wife, Kristine De la Cruz, a US citizen and from the Oneida Nation, “my husband is not the man ICE is trying to make him out to be. We’ve been together for sixteen years, he’s my best friend, loving father and loyal friend to many. He’s a hard-working man that does all that he can to support our family. ICE and the Milwaukee Police Department are treating my family and I like we’re nothing. They took away someone’s father, our provider, how could they stand there, smile, and act like that’s ok, while they ripped a father from his children? My daughters don’t understand any of this, and it hurts me so much when I think of them in the car screaming for their daddy, unable to hug him goodbye, as he was taken from our lives. My daughter had a breakdown in school yesterday.  How are they supposed to process the trauma of our family being separated?”

The De la Cruz-Espinosa survived through their small family run business. Without Jose, the sole financial provider, his wife is struggling to cover immediate needs. The family has a Go-Fund-Me to help cover costs to prevent Jose’s deportation and their basic needs. Click here to donate.

Voces is calling for immediate action and will be meeting at City Hall, in Milwaukee at 4:30 pm on Thursday, September 26, and again on Thursday, October 3. We will be protesting and calling for the Fire and Police Commision to vote in favor of an updated SOP130 policy that bars collaboration between MPD and ICE.

Media inquires can be directed to Jessica at jessica@vdlf.org

Caught on Video: The Milwaukee Police Department Collaborates With ICE.
Voces Calls on Public Officials to Amend SOP130 to Prevent the MPD from Partnering with ICE