You are here: Home › News › Advocates and Faith Communities to Rally in Support of Pastor Betty Rendon and Carlos Hincapie 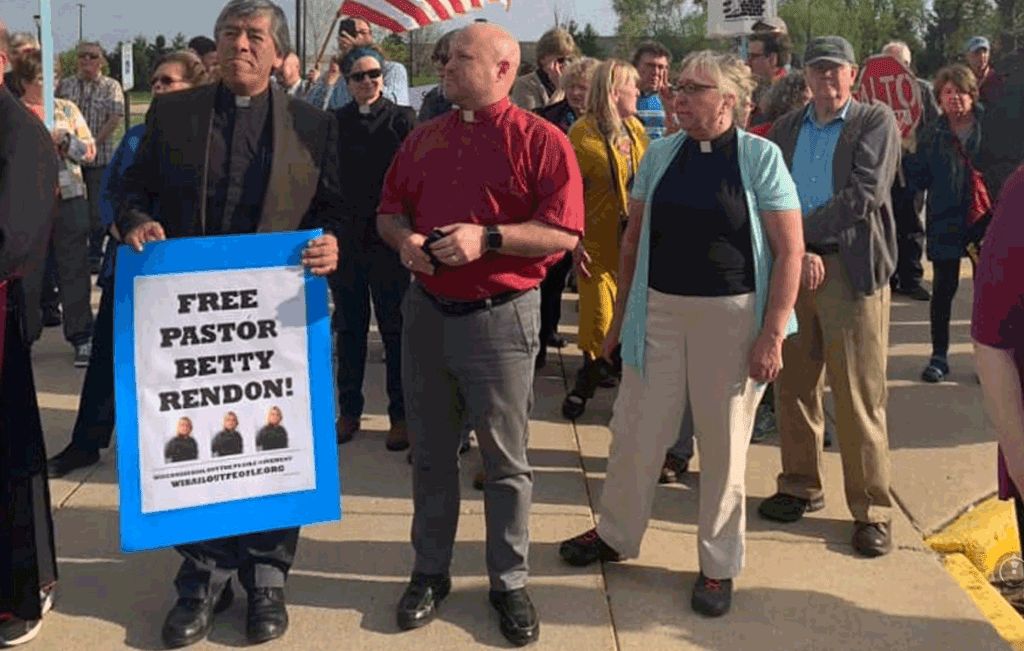 CHICAGO – Two weeks after Betty Rendón and Carlos Hincapié were arrested at their Chicago home as part of a U.S. Immigration and Customs Enforcement (ICE) operation that has destroyed their family, advocates and faith communities will rally in their support outside ICE’s Chicago office as the couple’s attorney requests a stay of removal.

Pastor Betty, her husband Carlos, a relative and their daughter, Paula Hincapie, were all swept up by ICE agents at gunpoint in their Chicago home. Paula is a recipient of the Deferred Action for Childhood Arrivals (DACA) program. Despite Paula’s protected status, it was the intention of ICE to arrest and deport her until public light was brought to her case.

Paula’s 5 year old daughter, Layla, witnessed the entire home raid take place and was traumatized by the experience. “My daughter witnessed the entire raid and to this day she cries for her grandparents, wondering when they are coming home,” said Paula. “Layla is now afraid of the police which she associates with ICE. While I am grateful to be reunited with my daughter, our family is not whole until my parents and Layla’s grandparents, who Layla calls ‘Abu’ and ‘Lito,’ are home with us.”

Pastor Betty and Carlos remain in ICE detention at Pulaski County Jail in southern Illinois and are represented by attorneys from the National Immigrant Justice Center (NIJC) through the City of Chicago’s Legal Protection Fund. Since the couple’s arrest, more than 65 organizations have submitted letters of support through the Emaus Evangelical Lutheran Church in Racine, Wisconsin, where Betty is a student pastor, and more than 13,000 people have signed a petition requesting that ICE halt the couple’s deportation to Colombia and release them from detention.

“Pastor Betty and her family’s experience highlights the actual implementation and consequences of the Trump administration’s ‘shock-and-awe’ plan to arrest and detain thousands of families in major cities across the U.S.,” said Christine Neumann-Ortiz, Executive Director of Voces de la Frontera. “The fact that this attack is against a Dreamer, a Pastor and an entire family in a militaristic style operation demands that the American public and people of all faiths unite to protect this family and prevent the further implementation of the Trump Administration’s continued campaign to terrorize and separate immigrant families.”

Reverend Paul Erickson, Bishop of Greater Milwaukee Synod, ELCA said, “I’m extremely disappointed that our government would choose to use their powers in a way that sows fear and tears families apart. We are calling on our leaders to adhere to a higher law, one that respects the right of individuals to flee from violence and honors the dignity of each person.”

Voces de la Frontera, the Racine Interfaith Coalition and Lutheran religious leaders are calling for a national day of action on United Nation’s World Refugee Day on June 20th to gather for a national vigil in Chicago outside of the ICE office. In the weeks leading up to June 20th, we are inviting people to organize local vigils outside of their local ICE offices and deliver a letter calling for the release of Pastor Betty and her husband and to end the escalated attacks on immigrant families.

Pastor Betty Rendon online petition
Stay on Order of Deportation Denied, Pastor and Husband to be Deported This Tuesday