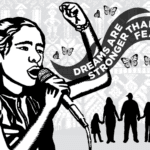 Art: “Dreams are stronger than fear” by Melanie Cervantes. As a result of the court’s order, on December 7, 2020, the… 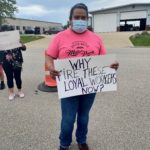 MILWAUKEE – In response to President Obama's November 20th announcement that the White House will take executive action on immigration, Voces de la Frontera released the following statement:  “We welcome this historic step towards equality that comes as a result of the tireless efforts of community members,” said Christine Neumann-Ortiz, Executive Director of Voces de la Frontera. “We know that millions of people will not be protected by this executive relief.  Our movement will build on this victory to keep fighting to stop deportations until all people in this country are treated equally.” “I have been in this movement for many years, and though I am one of those who will not benefit, I am not defeated,” said long-time Voces member Guadalupe Romero, who has lived here since 1990. Although Ms. Romero’s grandchildren are U.S. citizens, she will not qualify because her children are Dreamers. “I will continue to fight for myself and all the people excluded from this relief.”

In response to the President's announcement that he will again delay executive action on immigration, Christine Neumann-Ortiz, exective director of Voces de la Frontera, released the following:

"Today's news is a clear statement from Washington that once again, politics trumps the lives of people.

Six years ago, President Obama was elected on a pledge to pass immigration reform in the first 100 days of his term.  Instead, his administration has squandered the opportunity to move a bill under a majority Democratic Congress.

They have chosen to continue the previous administration's "endgame" enforcement policies to build and expand a deportation machinery that has torn families apart, criminalized working class people whose labor we benefit from, and only served to benefit private prisons and private military contractors on the border.

Yet again the President asks the people for more time. Our families don't have that time - not when ICE's arbitrary quotas demand that 32,000 people be detained a day and 1,100 end up being deported daily.

The major lesson for our movement now is to overcome the cruel partisan gamesmanship that dominates our culture, and for the people most impacted to escalate our activity and voices on the ground.

And that's why we'll mobilize harder than than ever to defend our communities, in the face of these cynical political calculations."

Statement: President Obama Has No Reason To Delay Executive Action

In reaction to President Obama's June 30th immigration comments, Christine Neumann-Ortiz, Executive Director of Voces de la Frontera, issued the following statement:
"Today for the first time, the President promised to act independently of a failed Congress to modernize our immigration policies through executive action.  He has no reason to wait, and every day that he does means increased suffering for immigrant communities.  By the end of the summer, when the President has implied that he will consider action, another 66,000 families will have been separated.
Months ago, Voces de la Frontera and other advocates submitted a broad set of specific policy change proposals to the Department of Homeland Security, as formal recommendations to DHS Secretary Jeh Johnson.
One of those recommendations, which could be implemented in under 30 days, is for the federal immigration agents to stop arresting people at courthouses, and for the administration to deem courthouses a "sensitive location", along with churches and schools. These raids are occurring when individuals are simply trying to do their civic duty, jeopardizing the hopes of people to legalize, and undermining public safety by creating fear and distrust of law enforcement.
In Wisconsin, a coalition of elected officials, organizations, and families have supported this call. In May, US Congresswoman Gwen Moore spearheaded a letter requesting that courthouses be off limits to ICE, which 59 Members of Congress signed.  During Congressional hearings, Sec. Johnson agreed with this recommendation.
Given the President's comments today, there is no reason that this recommendation shouldn't be at the top of the administration's to-do list."
###

GOP Immigration Principles Do Not Address Crisis of Family Separation

Milwaukee, WI -  In response to the Republican principles for immigration reform released yesterday, below is a statement from Christine… On January 25th, Voces de la Frontera held its Annual Assembly - a collective, democratic meeting for our members to determine our yearly agenda. At this meeting we planned our projects and priorities for this year. As the Obama administration approaches a heartbreaking two million deportations, immigrant families organized to fight back this year against local immigration raids, and for statewide and federal campaigns to achieve legalization for the eleven million undocumented people in the US. More Photos

Three generations of the Anguiano family (from left: Sofia, Cecilia, and Luz Maria) risked arrest along with nine other women today at Paul Ryan's office in Racine, acting in the name of their family in Mexico who have been waiting 17 years for a visa and re-unification.

Following a week-long vigil and afternoon rally, on Friday immigrant women came together in Racine to block Sixth Street and call on Congressman Paul Ryan for a legalization process that protects family unity. At a town hall meeting in July, Congressman Ryan, a key player in the fight for immigration reform, promised legislation that will keep our families together by October. October has come and gone, and families are now holding the Congressman responsible for his words. More than 100 events planned for Saturday across the country, including Milwaukee, Racine, Kenosha, and Green Bay

On October 5th, immigrant families and organizations nationwide will escalate pressure on both President Obama and the Republican-led House, calling on the President to use his executive authority to end deportations  - and on Congressman Paul Ryan to introduce an immigration bill with a path to citizenship this month.

Voces de la Frontera organizer Cecilia Anguiano, 25, and her grandmother Luz Maria Hernandez, 75, were arrested today in Washington DC in the largest civil disobedience for immigration reform yet.  Both are from Racine, and are calling on Rep. Paul Ryan to move his colleagues in Congress for an immigration vote this year.  (Photo by Gary Cameron/Reuters)

WASHINGTON, DC—Approximately 100 women were arrested this morning after blockading the intersection outside the House of Representatives to protest the House’s inaction on comprehensive immigration reform that treats women and children fairly.   Voces de la Frontera organizer Cecilia Anguiano, 25, and her grandmother Luz Maria Hernandez, 75, were among those arrested.  The Racine residents were representing immigrant families in Rep. Paul Ryan’s district.

Speech by executive director Christine Neumann-Ortiz, delivered on September 2nd at Milwaukee's Labor Day march & rally: "The fight for immigration reform is a fight about rights on the job.  It is about eliminating the threat of retaliation for reporting abuse, stolen wages, and dangerous working conditions.  It is about the right to organize with other workers to address these conditions."

While Congress is in recess and the President is on vacation, 44,000 immigrant families will be torn apart through deportation.  August 15th marks one year since President Obama implemented the Deferred Action for Childhood Arrivals (DACA) program, a mandate through executive order that allows DREAMers the opportunity to come out of the shadows and be free from fear of deportation as well the ability to get a work permit and a driver’s license.  Although DACA represents important progress, DREAMers and their parents need Congress to pass broad legalization with a path to citizenship this year. At a rally in front of the Milwaukee County Courthouse, students, elected officials, business leaders, and immigration reform advocates celebrated the anniversary of DACA and launched a 12-city statewide tour for humane immigration reform during the August recess, titled "License to Dream: Strengthening Wisconsin Through Humane Immigration Reform".     Click here to view photos.

On June 24th, the Senate voted 67-27 to advance the latest version of its federal immigration bill (S. 744, the Border Security, Economic Competitiveness, and Immigration Modernization Act of 2013), which includes a dramatic increase in the militarization of the US-Mexico border. 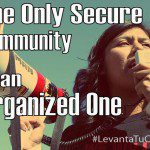 The time has come for a clear path to legalization for the 11 million undocumented people in this country. Below are some ways you can help: 1. Will you be 1 of 100 callers and commit to calling your Senator every day for the next week?  We're going to need to pass this bill with strong bi-partisan support in order for the legislation to survive in the House, which is why it's imperative your Senator hear from you now.